What’s worse the being stuck in a video game?

Being stuck in your bank alt!!

Vörissa’s Catalyst Online is a virtual reality MMORPG with nearly ten million players. Nobody is better at the game the Devon Priestly. He’s accomplished more then anybody else, bested every boss and even solved some of the game’s biggest mysteries.

But when a mysterious glitch robs the players of their ability to logout, millions are trapped in the game.  Devon is trapped like the others but not as his legendary Mage Stov. Devon is trapped in his bank alt. Starting over as a level 1 rogue name Rake, Devon must learn to think and fight like a rogue if he has any chance of conquoring the harsh digital landscape.

If he’s smart than he’ll survive. If he’s lucky than he’ll keep his sanity. If he’s both then he may just find a way to logout.

In his new series, Larry Gent explores family, what it means to be human and the lengths people will go in order to survive.

a mysterious glitch traps millions in a video game. Yet unlike others, Devon isn’t stuck in his main, he’s trapped in his Bank Alt. He must learn how to fight and survive if he has any hopes of surviving VCO, its monsters and the powerful Steelion.

After the duel in Havenhold, Rake is in hiding. He wants to be left alone. Fate has other ideas. When an old friend comes begging for help, Rake is pulled into a rescue mission and falls head first into a plot that threatens every single player. But can they fight without a leader? All eyes are looking at Rake but does he have what it takes to lead the players in their time of need? 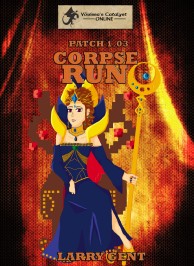 Weeks have passed since the glitch and Enclave-Nohorian Brotherhood war rages on. But from the battlefield a new threat emerges. It is a silent sniper, killing players from afar with a bow and arrow. Who is this killer? What does he want? Why does he target those close to Rake? He has no idea but Rake just hopes he survives long enough to find out.

The war is over and the Enclave has won. Better yet, they have survived. With peace on the horizon Rake can return to completing his Casper Cache. The only problem is the final item in the set is no longer possible to get.  The worst part is that his alt – Stov – has the very item Rake needs in his bank. So what’s a rogue to do when the item he needs is locked in a video game bank? He robs the bank.

In the words of a wise woman