Have you ever tried bringing up suicidal bombers at a party?  It’s not a great topic.  People get weird, they start to avoid you and you become that creepy guy alone in the corner.  In truth it’s a mood killer.  However, by the power of MATH, if you substitute innocent horrible-bombing victim for evil green pig, and suicide bomber for cartoon cute avian creature with an affinity for irate attitude the topic becomes happy, joyous and fun.

That’s the power of MATH ——- or Angry Birds.

I don’t often review iPhon/ipad games but Angry Birds Space seemed special.  March 22 marks the release of the highly avian, and anticipated, sequel: Angry Birds: Space and to be honest the game is good.

I was a little late getting to the original Angry Birds, it seemed like Worms or Sorched Earth from my childhood just with birds.  I’m not a big fan of birds.  Now had it been DINOSAURS!!  I’m getting sidetracked.  I eventually tried AB and instantly fell in love with its charm, it’s ease of learning but difficulty in levels, and the subtle physics involved.  After pouring through AB, AB Seasons and AB RIO (I even ripped through the Facebook exclusive content) so I was eager for ABSpace.

The game takes the AB formula: birds flung at pigs, and keeps it firm.  What changes is everything else.  The setting, Space obviously, is more than just a backdrop; it’s the building block of the game.  The pigs now hide on dozens of small planets, looking similar to Super Mario Galaxy, and you rocket through space to find them.

The biggest change is gravity. 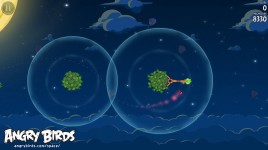 Each planet has small blue circles around them.  This is gravity.  It pulls your birds to the planet’s surface quickly and fast.  If a bird is shot outside the gravity it just keeps floating away until it hits something, like real space.  This adds new difficulty and originality to the puzzles.  If you curve around a planet, you’ll keep spinning around and around like water down the drain till you hit the planet.

Then there are the birds.

At the most basic level the birds look different.  Each is wearing a space mask that looks like something out of Buck Rogers or Flash Gordon.  Then we get to the meat of the birds: their abilities.  The birds act the same but some have minor tweaks.  The yellow bird dive domb ability now has a targeting method.  You tap where you want to go and the bird acts like a fired torpedo.  The Black Bird, the exploding one, is mostly unchanged but the way to use him has changed.  There are the ‘exploded-to-take-out-a-lot-of-block” levels but with the lack of gravity in space we are given a new method to use them.  Fire a black bird at a floating asteroid and the angle at which you detonate the birds suddenly changes the game into a intergalactic game of pool with the black bird as the cue ball.

All in all this new game is more than just new levels and a new name (like RIO and SEASON) but an entirely new way of playing the game.  I often found myself holding my iPod not horizontally to play but vertically for numerous levels.  Between the new gravity, and boss battles, this new Angry Birds is a step up and a wonderful game price BEAUTIFULLY at $0.99 on iTunes.