Harbour Con Fusion came and went this weekend and I got to meet some amazing people.  For those who don’t know Harbour-Con Fusion is a small (very small) con in Saint John, NB.  It’s BRAND NEW and has great potential to grow.  I really hope it does.

Johnny 5 is alive – in T-Shirt form

K.M. Cooper
I met a brilliant young writer named K.M. Cooper.  She wrote a book called Hub City Survival which is about a zombie apocalypse in NB.  We had drinks and chatted.  Why is it authors and drinks go hand-in-hand?  I kept trying to get a picture of me and her but time never presented itself.

Ok truth time: It did; I just am a procrastinator.
So I had to grab a picture another friend took and use that.  If it looks like I cropped somebody out of this picture…..I did.

I really hope I can work with her soon. 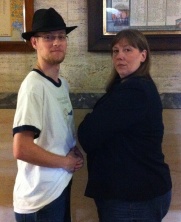 We were told to look dignified. It took 37 takes.

C.S. MacCath
Last year at Hal-Con I was the personal assistant to a monster of a lady.  Her name: C.S. MacCath.  I mean this woman was my boss all weekend (during HC2012) and made me do unspeakable things (which is why I am typing them) like SIT DOWN and HAVE A LEMON TART.  The MONSTER!!

Truth Time: I loved PAing for MacCath.  She was wonderful.

Below is a transcript of us together at this weekend.

This makes up for cropping you out of the last one!

Darren Hann
I met Darren Hann years upon years ago at an event called Hal-Con.  This is a threat to all mankind.  He makes movies, runs cons and writes.  See a threat!!  —- wait what?  It’s pronounced TRIPLE THREAT?  Oh….so what I said mean something COMPLETELY different.   Oh……..I gotcha!

This year we shared a stage for our Geeks versus Nerds debate Redshirts vs Stormtroopers: Who is the more ineffectual army?  We were on team Stormtrooper.   Turns out Stormtroopers are too good at their job to be ineffectual.  Who knew?

Damn! You ARE taller then me!

Robert Maillet
I would like to introduce you to the biggest actor in Hollywood: Robert Maillet.  He’s the guy from 300, Immortals and Sherlock Holmes.  He is also Russian Jaeger Pilot Aleksis Kaidanovsky in Guillermo del Toro’s Pacific Rim.  I got to see him again – I met him a couple years ago at HC (man I do a lot in HC don’t I?).

Truth Time: I thought I was bigger….I was not.

Did a Q and A and somebody called Aleksis Kaidanovsky the Boba Fett of  the Pacific Rim series.  He was there, didn’t say much, and developed a cult following.  He found that cool.

So all in all the con was kewl and I did two stage shows for them and even hosted my own panel on Blogging but that’s coming up soon!!