Out of all the things that were rebooted in the New 52 the one that bugged me the most was Barbara Gordon.  Her journey was one I enjoyed the most.  She was a child, a teenager, and became Batgirl.  Then she got shot by the Joker, got paralyzed, stuck in a wheelchair and then instead of just quitting she evolved and became the Oracle and she became a stronger and better character.

From token-female-sidekick to something new.

Then the world rebooted and things changed – but not as much as I’d once thought.

The new premise is simple.  Barbara Gordon was Batgirl, star pupil to the urban legend Batman, and things were great.  Then the Joker showed up.

The Joker shot Barbara and put her in a wheelchair but only for three years.

So the comic starts with Ms. Gordon getting back into her Batgirl persona.  She is rusty, out of practise and making mistakes, but worst of all she is suffering from fear. 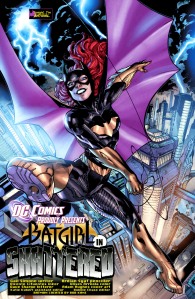 Gail Simone writes a brilliant tale about Batgirl returning to fighting form.  She has the confidence.  Always the detective she has the meticulous attention to detail, she has eidetic memory, the ability to research and learn anything.

This is Barbara but she is not perfect.

She is still rocked by what the Joker did to her.  She panics when she hears a doorbell, she is scared of the outside world, and she’s just starting to get used to people again.  This is the focus of the first issue: Barbara Gordon is broken – but she is healing.

The villain is a new one, known as the Mirror, who seems to be hunting survivors and Barb’s on his list.  She may be healing but for how long 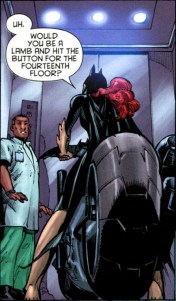 Ardian Syaf designed Batgirl’s new costume.  Gone are the long spandex and the black and yellow motive, instead she is given a more practical costume that looks a lot like Stephanie Brown’s.  The costume is still black and yellow but she had Stephanie’s purple.  She doesn’t have the high-heel, she had combat boots instead, she doesn’t have spandex, and instead she has a multilayered armoured suit.  This Batgirl is ready for whatever is thrown at her.

This is one of many new reboots in the DcnU and out of all of them, including the terrible Justice League International and Action Comics, this has been one of the best so far.  I am excited to see where Simone will take this new chapter in Batgirl history.