How to be a Geek: Dub vrs Sub 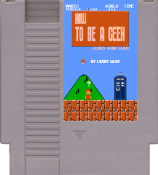 That was a shocker wasn’t it?  Who would have thought that geeks, of all people, were opinionated people?  But it’s true.  Geek have opinions, strong opinions, about the Star War prequels, about which Starfleet Captain is better and which wizards is greater (It’s Elminster – hands down).  Geeks also have opinions about what geeks should be – I’m no different.

How to Be Geek isn’t an instructional guide or a check list to follow – it’s a one-man observation on geek culture, what it means to me and how it affects my life.  One thing that affects my life is anime.

I met my wife at an anime convention.

In short, anime has had a massive influence on my life.  From the early days of Astro Boy, to the teenage days of Dragonball and my adult days of ….well…..still Dragonball.  Seriously, I’m still a massive Dragonball fan.  While I have spun out from DB, DBZ, and DBGT, spinning into animes like Trigun, Cowboy Beebop, Kenichi, Sgt. Frog, Ranma 1/2 and many, many others, I have noticed one thing that ties them all together.

Before I say this statement be warned that this will piss off a lot of people.

Dubbing is far superior to subbing.

There is an argument between anime fans of which is superior, dubbing over the voices or just putting subtitles on the bottom.  To hardcore anime fans there is no argument – subtitles or nothing.

I think they’re crazy.  I think subbing is just lazy.  I’ve spent my fair time watching anime, both subbed and dubbed, and I understand both arguments.  In the beginning, before companies cared about anime (i.e. before there were legions of anime fans who would buy anything they put out) dubbed anime wasn’t taken seriously.  It wasn’t given the time or effort it required and it came off sloppy and bad.

That’s not the way anymore.  Dubbing is a serious business.  Dubbing makes jobs, dubbing is hard work, and dubbing makes an anime better in my opinion.  Those were three bold statements.  So I’m going to break them down one-by-one.

When an anime is simply given subtitles it’s a job that can, theoretically, be done by one or two people; one to translate the dialog and text from Japanese into English (or French or Klingon or Mando or whatnot) and one person to edit/program it into the film.  Dubbing takes a team.  It still takes that translator and video editor but it also involves a casting director, a voice acting director, and a whole team of talented voice actors to give these characters a new voice.  The bigger the cast the bigger the team and in a time when difficult is the norm, more jobs helps make things a little more bearable.

Dubbing anime requires an actor to provide the voice for an animated character.  Dubbing for anime is very different from providing voice work for something like Simpsons or voicing some animated car or fish in some movie.  Let’s look an example.

So Pixar decided to make a movie about furniture that comes to life.  This movie revolves around a set of chairs planning a heist to steal the world’s greatest cushion.  They call it Take a Seat.  (Actually that sound amazing – COPYWRITE GvN)  So they decided to get Brad Pitt to voice the charismatic lead chair.  The company begins animation, they do some preliminary work, get a feel for the character, and then they go record the voices.  Brad Pitt goes into a voice booth and starts to lend his voice to this chair.  Now this is where things get interesting.  Brad decides that one line shouldn’t be said all serious-like and instead wants to go a little crazy with it and in a fit of artistic inspiration decides to do the line in an exasperated yell that looks like something out of The Mexican.  The director loves it and then the animators draw that scene to match Brad’s (dreamy) voice.

So when you lend your voice to anime, dubbing over the existing Japanese voices with English, the process is very different.  So Funimation gets the rights to an anime about chairs that come to life.  This anime movie revolves around chairs that, after being possessed by death demons, murder high-school girls during the day in an effort to plunge the world into darkness and bring about the end of days, all in a bid to force the god of creation, the Maker, to return to the Earth.  They call it something unpronounceable. (Actually that sound amazing – COPYWRITE GvN).  They – somehow – get Brad Pitt to voice the one good chair that fights back against the others.  Now before Brad goes into a booth they have to rework the script.  They have to change the lines to make it sound localized (ie Doctor Who spend 15 min talking about a torch and I keep looking for a burning stick only to eventually realized that torch mean a FLASHLIGHT).  But it’s more than just switching the lines.  They also have to make sure that the new lines can be said to match up with the moving mouths.  A properly dubbed anime will not look like a kung fu film that we all love, and love to mock, where the lips and voice don’t match.

A voice actor doesn’t have the freedom in dubbing that they do in original recording.  So if Brad Pitt feel like that scene where his chair gives a riveting speech against the evil ones need a little more flair and gusto – that it would be better by channeling his inner George Clooney (because many of us have a little George Clooney in us.  Some like the girls he’s dated in the past have had a little more Clooney inside of them) – he can’t because the artwork is already drawn.  Brad has to act to the scene.  He has to provide his own flair, his own hunk factor, in a very specific way.  With dubbing it’s about the subtlety of the voice.

Example: Rurouni Kenshin is a soft spoken hero who when he slips into ‘battle mode’ become stanch and firm and is a killing machine who chooses to hold back.  In the original anime he is voiced by a woman.  A female voice may work for Japanese audience but in NA it would just sound weird.  Unless you’re a buck-tooth pink hat animated boy with fairy god parents or an eternally ten year old bad-boy with yellow skin and pointy hair – you shouldn’t be a male and voiced by a girl.

Example: Vegeta is the prince of Saiyans.  He is a bad-ass warrior, a brute of a man, a nearly undefeatable warrior (minus like five others and Goku) and his Japanaese voice actor – Ryō Horikawa – gives him a high pitched feminine voice.  Here in the US that type of characterization would be unbelievable.  Who would fear the high-pitched squeaky prince bad-guy? Nobody – That’s who.  So when he got to the US he got a burlier voice, a voice more suited to the bad-guy prince with the heart of gold.

This entry was posted in anime, H2BG and tagged anime, batman, dragonball, geek, h2bg, how to be geek, kenshin, rant. Bookmark the permalink.

1 Response to How to be a Geek: Dub vrs Sub