Welcome back to Tuesday Test.  Today we look at the most well-known, and best trained, sidekick in the entire world: Robin.  From Burt Ward to Joseph Gordon-Levitt, Robin has been everywhere, fighting bad-guys, super-villains and even Luigi.

The first Robin, Dick Grayson, was introduced in Detective Comics #38 (April 1940) and was conceived as a vehicle to attract young readership.  Robin garnered overwhelmingly positive critical reception, doubling the sales of the Batman related comic books.

Since then there have been five pre-52 canon Robins, a bunch of imitators, futuristic-robot versions and dozens of Elseworlds adaptation of the Dark Knight – each with their own origin and their own Robin.  Between quitting, getting fired, being a woman or dying, the role of Robin has had a high turnover.  It’s like the call-center of the comic-book world.

This crossword looks at anybody who had the name Robin, Red or otherwise, worn the costume or became the Bat’s sidekick.  Enjoy and make sure to keep the Bat safe.  Need Help?  Have a comment? Message us at on twitter @42webs 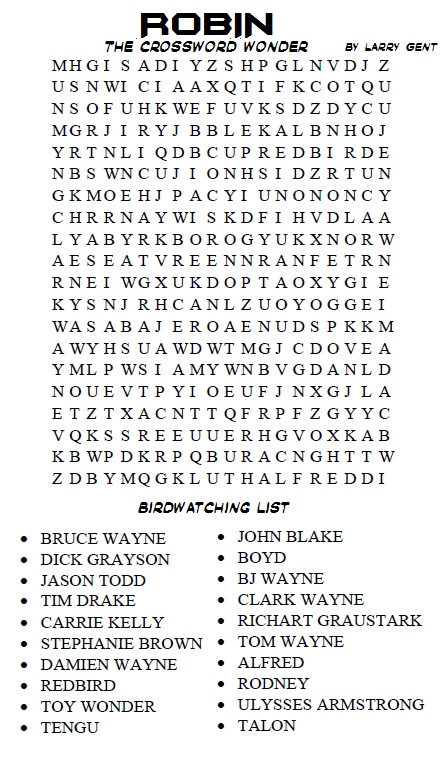